EMMA TURPIN
(b. 1964)
As an artist I spend a lot of time alone in my studio, I'm used to it. All of us over the past 18 months have all been forced to isolate, to stay away from other people, to see nobody but those closest to us. My recent work is a response to the paradox of at the same time being forced together with some but forced apart from most. The paintings show collections of buildings isolated in a landscape, always seen from a distance but illuminated by their closeness to one another. 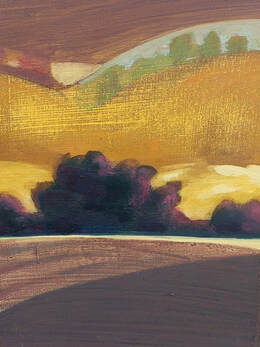 'In recent years, Emma has been exploring the notion of shelter in landscape. There are structures hidden in forests, and there are others that have almost become part of the landscape with trees bursting from inside them. In other works we see nothing built or man-made but rather shelter suggested by an area of light emerging through a tangle of branches. Emma uses these familiar natural forms to try and find a harmonious resolution between colour and form.'